Touching and Fiddling with Things

Home/Articles/Touching and Fiddling with Things

Touching and Fiddling with Things 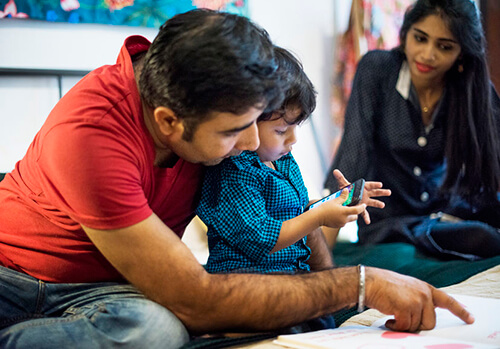 How to save your valuables from your kids!!

Fidgeting, as the dictionary defines it is the act of moving about restlessly. Even though the person who is fidgeting might not make a great deal about it, people who are on the receiving end, often find people who are fidgeting to be annoying.

Have you seen your child moving around touching or tampering with something or the other at all times? Does he or she find it difficult to sit peacefully in one place? While children are a lot more curious and inquisitive than adults and do very little to curtail their inquisitiveness, the simplest cause of their fidgeting could be the lack of proper stimuli. He or she may not have anything better to do, than touch the flower arrangement or the crystal vase. Sometimes it is also a result of the agitation, nervousness, or a combination of both.

Most of the time, fidgeting led by boredom is harmless. Children with high levels of energy and curiosity are known to touch, feel, and move about a lot more than their peers. Very often it is an unconscious act. Sometimes it may involve minor things like zipping and unzipping one’s jacket constantly, playing with one’s fingers, hair or tapping a pen or pencil incessantly. Or major/dangerous things like trying to stick something into the electrical socket or exploring breakable decoration pieces around the house (or worse still on a shopping trip, while your busy shopping and not looking)

Prep yourself and your house

As a parent, if you are aware that your child is on the curious side of the fence and likes to explore, make sure that the touching habit does not harm your child. Very often curiosity might lead the child to electric sockets or glass objects, which are highly dangerous. Always remember to childproof your house, where the sockets are taken care of, all heavy objects placed in such a way that they do not cause harm to your child even if he or she approaches it. Remove all dangerous things and valuables from the proximity of a small child. As the child begins to grow up, from time to time explain to them how some things are out of bounds and how they must not play with them. For example, if you do tell your child the consequence of sticking their hand in the electric socket, chances are they will understand (you can cover unused sockets with dummy covers which are easily available in the market).

To make your child feel less restrained, allow them a play area, which is theirs and theirs, alone. This is a space where they can touch, feel, and explore anything they want without restrictions. A cupboard full of toys, and/or the corner of a room with safe objects could be their non-restrictive zone. When restricted too much, a child may wait until they go to someone else’s home to start exploring. They may also look forward to the time when you are away, so they can start experimenting.

Ignore- it may be an attention-seeking act!

Treat fidgeting just like you would thumb sucking or any other bad habit. The first rule is to ignore. If you give attention to the child who is fidgeting, he has been rewarded. If the fidgeting is happening for attention, then the child’s intention has been met. Hence do not react /appear disturbed, stay calm, and remind the child that what he or she is doing is not the right thing to do.

Like all bad habits, it takes time and patience to get your child off the fidgeting behavior. When the child does listen to you, reward him or her by giving them a special snack or some other treat. Positive discipline has been seen to work better than physical punishment.

Give them something better to do

Maybe your child is moving around or touching things unnecessarily because they have nothing else to do and are bored. Help them find another activity that will occupy and hold their attention.

Once children are adequately involved with activities they like, they will let go of the fidgeting. Ask them if they would like to play with some toys, or read a book. Start an activity they like and let them continue with it. It will channelize their energies away from the fiddling and onto the new activity.

Some recent studies have proved that when children were allowed to move their hands, they thought better. So the age-old concept of sitting still with your hands in one place may be getting a little outdated. Even as adults, when we are trying to find a word that is at the tip of our tongues, we unconsciously start moving our hands, it just helps our brains form the image and extract the word quicker.

The new age thought says that far from restricting children to stop fidgeting or moving around in school, if school teachers encourage more of it, the children may end up learning more. Research has proven that when allowed even minor movements of the hand, children were bound to grasping and understanding the concept better than when they were not allowed to move. To conduct this research, the hands of some children were put in mittens and the hands of other children were left free to wander about.

Children, just like adults, are most productive when they are alert and calm and are using their minds well. Even we have moments when we are curious or distracted and end up switching channels on the television more than necessary. When as adults we give ourselves the freedom to fidget and investigate, this right must not be taken away from children entirely. Try not to stop your child from touching everything. Allow them certain freedom and lots of opportunities to engage themselves when you find them fidgeting.

Fidgeting is now getting a new outlook and may soon lose its stigma, considering how beneficial it is to children.

Consult a health professional (pediatrician or a child psychologist)

While touching things around them may be ways for children to satisfy their curiosity and can be addressed in simple ways, you may need special intervention if the fidgeting levels of your child are too high. In this situation, you may want to get an evaluation done from a child psychologist. The doctor will help you to understand the reason for this excessive fidgeting. Is it just boredom or anxiety? Once you know the cause tries and solve it by either providing stimuli or calming the child down. Some children may have ADHD or obsessive-compulsive disorder (OCD) which needs special care.

The key behaviors of ADHD are hyperactivity, lack of attention, and impulse actions. It is normal for all children to exhibit the above three behaviors, however, when these become excessive, the syndrome is called ADHD. When fidgeting or hyperactivity and inattentiveness and impulsiveness are very severe and occur very often, it is best to get an expert to give an opinion.

The below-mentioned symptoms of ADHD must persist for 6 or more months in comparison to kids of the same age group to diagnose the disorder:

Symptoms of hyperactivity are:

Symptoms of inattentiveness are:

Symptoms of Impulsiveness are:

Children or adults suffering from OCD have an anxiety disorder and they may be plagued by certain thoughts or actions. They may want to repeat certain actions over and over again out of compulsion. They could be engaged constantly in counting, checking their hanky, or washing their hands. In most cases, they do so for throwing away compulsive thoughts that keep coming to their minds.

Both ADHD and OCD are curable. The diagnoses of both the above can be made only by a professional. In case your child is diagnosed with either of the disorders, make sure you tell the child’s school authorities and teachers -and ask them to be a little more tolerant and patient with your child.

Click here for Case Study on Touching and Fiddling with Things

Top Questions on Touching and Fiddling with Things