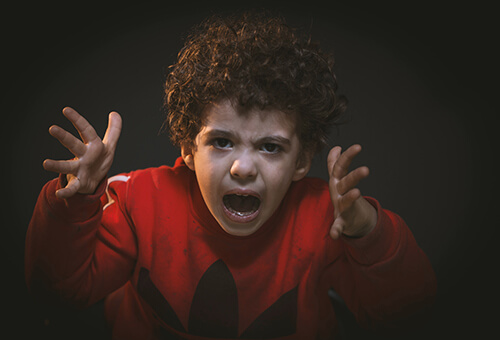 For children, anger is a feeling that often follows the emotion of being powerless in a situation. Children may express anger as a result of being told to do something they don’t want; being scolded; being punished or even as a cover-up for hurt feelings. Children may even be angry or frustrated with a particular situation or any particular person. Sometimes the anger may be a result of a power struggle between the children and the parents. Children whose parents exhibit aggression in their daily lives often pick up this behaviour because they think that it is the right thing to do to handle a situation.

Whatever the reason may be, but they are sure to have a good reason for their anger and aggression. The tricky part is that often they don’t themselves know why they are angry. It needs to be patiently found out and to be addressed to positively direct the behaviour of a child.

It’s ok to be angry
The first and foremost thing to understand is that children must know that it’s OK to be angry. It’s a feeling that they don’t understand (especially in very young children). And since they probably don’t even know why they are angry, it is best for them to feel comforted by the knowledge that “being angry is OK and normal”.

Child behaviour work teaches us in case after case, that kids behave better if they know that the parents expect good behaviour; AND if the parents acknowledge that a child can be angry and that these emotions are natural

Find out why
You must ask them the reason for their anger. If they cannot articulate it at that time, give them time. Perhaps the anger in their mind is clouding their ability to understand the reason for their anger. If they are unable to tell you even after some time –help them. Prompt them with options of what you think could be the reason for the angry and aggressive behaviour that you just saw from them. The articulation of the reason for anger will be a big first step. Having found this out (or in some cases the child may already know the reason) the next thing to do is to tell the child that he cannot use actions (physical behaviour like throwing things, hitting out or any such stuff) to express his anger and must say it in words. Tell him that if he is angry with someone he must tell that person the reason for this anger. Also that it is necessary to go to a quiet corner all by himself till his anger cools off. You as a parent must exhibit and model this behaviour. When you are angry, tell the child “I am angry for _____ reason and I need time to cool off. I am going to my room and will be back in some time”. The child will see that you are feeling angry and expressing it in words, and taking time to cool off. When he sees this behaviour from your time and again, he is very likely to emulate it and handle his own anger better.

Make no distinction
Sometimes parents set lenient limits for the display of aggression from boys’ vis-à-vis girls. Never do that. Angry and aggressive behaviour is as unacceptable from boys as it is from girls. Both must learn to handle it and conduct themselves well. Because if they don’t learn ways of getting control over their emotions, they are likely to get into trouble in their social dealings in life.

Similarly, if your children are fighting over something don’t take sides. This leads to one child reacting in an angry and aggressive manner. Sometimes parents are softer towards the younger child while trying to solve fights between siblings. Continued behaviour of this kind makes the older child resentful and aggressive. Don’t try to decide who is right and who is wrong in an argument between siblings. Let them sort it out on their own (see the article on Siblings)

Handling and avoiding aggressive behaviour
A lot of the display of anger and aggression is because children don’t agree with what’s going on (either they don’t want to conform to the daily routines they are required to follow or the behaviour they are expected to display etc). When you expect such a situation to develop-ask for the child’s opinion. Work with the child to make him understand why it is important to do a certain thing/go through certain routines and so on. Once the child accepts it as a part of his life-he will stop resenting and stop getting angry about it each time he has to do it. He still may not like it, but participation in decision making will ensure that he goes through with it.

Look for places where you may be inviting anger from your kids. Are you too demanding? Are you nagging? Are you too interfering? Every child is unique and may or may not like certain things. Try and identify those and avoid triggering aggression. Also, consider-are you ordering them around instead of asking for participation? Watch your tone with kids. The point is that while you need to discipline them, you shouldn’t display negative traits (least of all aggression) to achieve this end. It’s better to say “It’s time for you to sit down and study, isn’t it?” instead of “Come on-go to your table and finish your homework now”. Children listen and learn –so watch what you say.

Another way to handle this is by giving children limited choices instead of telling them what to do. No one (kids included) like to be bossed around by anyone else. Work with the kids in such a manner that they are their own bosses. Work out schedules and routines to be followed. These must include both fun and work. That way the boss is their “Day Calendar” and not you.

Talk about aggressive behaviour to kids when they are in a good mood to discover the reasons for their behaviour-also suggest what they can do when angry (like cooling off in a corner or talking to someone they trust about it and so on). Some kids may not display anger and aggression but may still feel it. They are like volcanoes ready to erupt-and usually the intensity is not predictable. Look out for signs where your kid may be feeling pent up anger and frustration and help him release it by talking to him. Tell him it’s OK to be angry and make him talk.

Assertive is OK. Aggressive is not
As life becomes more and more competitive, the amount of aggression we are exposed to goes up. There are limited numbers of resources available for an ever-increasing number of people. This creates anxiety and intensifies competition. Consequently, people become more and more aggressive. Teach your child to be assertive; to be bold enough to put his point across and not to be timid. But teach him not to be aggressive.

Another reflection of aggression in society is violent programming online, on TV, cinema, video games. Limit your child’s exposure to violence in the media. It is now proven that brutality in films triggers aggression in adults as well and children are no exception. Negative images take root and may reflect in behaviour.

Display your disapproval for lawlessness in programming -let them know cruelty is not good even in make-belief. This will instil good values in children and they will stay on the right side of values and law when they are exposed to violent situations in life.

Click here for Case Study on Anger and Aggression

Top Questions on Anger and Aggression